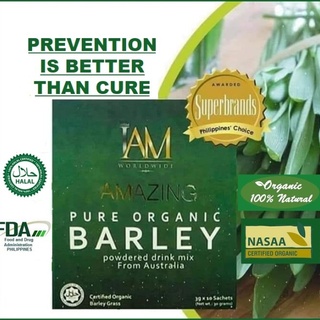 Amazing Pure Organic Barley ( Treatment for Cancer ) How it Works: If we look at oxygen as a bullet to kill cancer cells, then we should look at Organic Barley as a shotgun blast at treating cancer. The number of ways it deals with cancer is incredible. First of all it contains chlorophyll, which has almost the same molecular structure as hemoglobin. Chlorophyll increases hemoglobin production, meaning more oxygen gets to the cancer. Selenium and laetrile are also in Organic Barley, both are anticancer. Chlorophyll and selenium also help build the immunity system. Furthermore, Organic Barley is one of the most alkaline foods known to mankind. Barley grass is one of the green grasses. The young barley leaves have a tremendous ability to absorb nutrients from the soil. When barley leaves are 12-14 inches high, they contain all the vitamins, minerals, and proteins necessary for the human diet, plus chlorophyll. Barley contains a multitude of vitamins and minerals. Its juice is seven times richer in Vitamin C than an equivalent weight of oranges, five times richer in iron than spinach, ten times richer in calcium than milk, is a significant source of Vitamin B-12, and contains 15 times as much protein as an equivalent amount of milk. Barley Juice Scientific Findings Good reports abound on the benefits of barley juice. Scientists have only scratched the surface in understanding why barley juice has helped so many. What is in barley juice? Scientists have found: › a substance to actually stimulate repair of the DNA molecule › a protein with strong anti-inflammatory qualities › substances that reduced hypercholesterolemia › substances that resulted in an anti-ulcer effect › components in barley leaf extract which de-activate mutagenic and carcinogenic substances › an enzyme called SOD which is an extremely powerful 'anti-aging' antioxidant, an anti-inflammatory enzyme and cancer preventive enzyme › another powerful antioxidant, 2'-0-GlV, more effective than vitamin E › components in barley leaf extract which were very effective in lowering the, blood sugar levels in high blood sugar mice › substances which help to inhibit platelet activating factor › substances which protect the blood vessels from damage › it improves or modulates Prolactin and growth hormone › barley juice degrades a variety of pesticides - Detoxification implications. › 5 enzymes were found that help the decomposition of fats in the body proceed smoothly which helps to promote correct body weight. Gluten, Dairy, Additive and GMO free How do you take the Amazing Pure Organic Barley Powdered Drink Mix? It’s best to take it on an empty stomach, either 20 minutes before a meal or 2 hours after, so that the nutrients can be assimilated easily without the presence of other foods. Make sure you use either cold or room temperature liquids, as hot liquid will break down the living enzymes in the Barley. Recommended Serving: Since this is a food supplement, there is no limit to the amount taken. There are no side effects or contra-indications. Amazing Pure Organic Barley Powder may be taken along side any prescribed medication. For Sick or Recovering People: 1 sachet of Amazing Pure Organic Barley Powdered Mix, 30 minutes before meals, three times a day. If for daily maintenance only: 1 sachet of Amazing Pure Organic Barley Powdered Mix, 30 minutes before breakfast daily. Packaging: 10 sachets per box (3g of barley powder per sachet) "Prevention is cheaper and better than cure" Protect yourself and your family! Drink Amazing Pure Organic Barley Daily! We offer Cash on Delivery Price: P1,000 per box 1 or 2 boxes - Add shipping charges of P180.00 FREE Shipping Nationwide for 3 or more boxes. Open for distributorship worldwide.. And enjoy up to 50% lifetime discount on all our health products.
Buy Amazing Pure Organic Barley Powder (Australia) for the price of ₱1000 from Marina Pantua located in Cavite, Philippines.
Share:
Click Here to View More Results